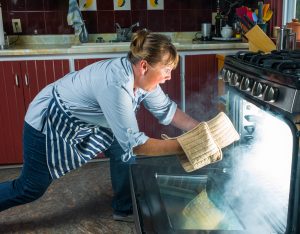 Here is an awesome Thanksgiving cooking tip that I learned TOTALLY BY MISTAKE years ago and haven’t deviated from it since. So if any of you know my back story (you can view it on the website at bonappetityallbycarlton.com/about-us), I wasn’t born with a wooden spoon in my mouth. You would think that since I grew up with a mother who was a home economics teacher, and my father who was a cook in the United States Marines that I would have picked up a few tricks on the way. NOPE. LOL.

I recall the time when my culinary curiosity started to peak and this particular year, I proclaimed to the family that I was going to cook Thanksgiving Dinner. (I had never done anything like that prior, but I felt bold enough to try). I resided here in Atlanta Ga, and my parents still lived in my hometown of Jacksonville NC. I was so excited because my parents were coming up for the holidays and this was going to be my BIG REVEAL.

Thanksgiving Day came and I woke up early and excited. I had seasoned and marinaded my turkey the night before and put it in the oven that morning awaiting the result of this spectacular creation.

I’ll never forget that my parents arrived at the house while I was still organizing everything for the feast. My mother walked into the kitchen, paused, and said “uhmm…everything smells good”. She walked over to the stove and opened the oven door, and just stood there with a shocked expression on her face.

All I heard was “Boy…what in the world did you do?” I asked her what she meant. She replied…” Boy, you put the turkey in upside down”. I replied “No Mother Dear (that’s what I called my mother, and for the record I called my father “Daddy Brown” – Don’t ask me why. LOL). The directions said to put the turkey in breast side up…” She replied…” Yes, but you put it in breast side down”. I was initially disappointed that I had seemingly flubbed up the turkey, but it was too late to do anything at that point.

It came time to carve and eat the turkey, and my mother took a bite and said “Boy I don’t know what you did, but this is the moistest turkey that I ‘ve ever had in my life”. I have to say it was a damn good turkey. Lesson learned… Cook your turkey breast side down instead of breast side up. This causes the juices to flow into the breasts keeping it nice and moist – no more dry turkey.

Enter your email to receive "10 Easy Kitchen Hacks You Wish Your Grandma Had Shared" and other catering tips!

You have Successfully Subscribed!

Listed as Best Caterer
in Atlanta Tribune
Best of Atlanta 2017

Don’t keep us a secret…
tell the world

We are ready to serve YOU!

Planning an affair? We can assist you in making your Occasional Occasion truly a memorable one.

Take a look at some of the amazing occasions we have had the privilege of being a part of.

By taking the time to plan your menu ahead of time, we are more likely to stay within your budget.